Ocean University of China at the 2019 China Ocean Economic Expo 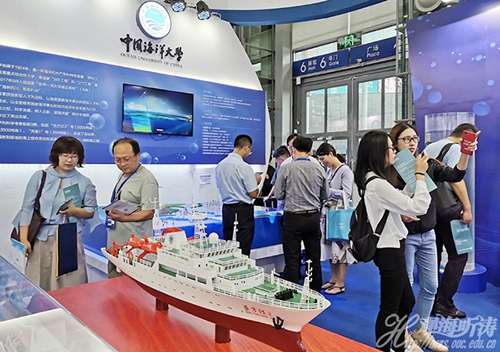 The 2019 China Ocean Economy Expo is held at the Shenzhen Convention and Exhibition Center. Ocean University of China was invited to participate in this exhibition, with more than 50 scientific and technological achievements in the three series of "Transparent Ocean", "Blue Granary" and "Blue Medicine Depot". The principal Yu Zhigang attended the expo and visited the school's booth.

With the theme of "Blue Opportunity and Co-Creation of the Future", this year's Shanghai Expo will focus on the achievements of marine economic development since the founding of the 70th anniversary of the founding of New China. It is a large-scale review of "Made in China" and "China Power". Xi Jinping, General Secretary of the CPC Central Committee, State President, and Chairman of the Central Military Commission sent a congratulatory letter to extend warm congratulations on the convening of the expo.

区，中国海大医药学院院长吕志华向前来参观的自然资源部党组书记、部长、国家自然资源总督察陆昊，广东省委副书记、省长马兴瑞，自然资源部党组成员、国家海洋局局长王宏等领导汇报了我国海洋药物的发展及学校相关研成果，获得嘉宾们的极大肯定。 In the booth design and construction area of the Marine Economic Achievement Exhibition at the 70th anniversary of the founding of the People's Republic of China, Lu Zhihua, Dean of the China University of Medical Sciences, came forward to visit Lu Hao, Secretary of the Party Leadership Group of the Ministry of Natural Resources, National Natural Resources Supervisor Lu Hao, Deputy Secretary of the Guangdong Provincial Committee, Mr. Ma Xingrui, the leader of the party group of the Ministry of Natural Resources, and Wang Hong, the director of the State Oceanic Administration, reported on the development of marine medicine in China and the research results of the school, which were greatly appreciated by the guests. The school's Shenzhen Alumni Association alumni and many professional visitors stopped at the school booth to praise the school's achievements. Guangdong Satellite TV interviewed the research results of the school. The exhibition site was so popular that the visitor flow exceeded 10,000.

The exhibition coincided with the signing of the Shenzhen Research Institute of the school. In order to highlight the strength of the school in the field of marine science and to enable Shenzhen to understand Haida in a more comprehensive manner, the Science and Technology Department led the relevant colleges (key laboratories) to meet the needs of Shenzhen. The research results of the past 20 years of the school were selected, and after a new planning and design, around the three series of "transparent ocean", "blue granary" and "blue medicine depot", it was displayed in all directions through physical, model, multimedia, and intelligent experience. High-quality school results. Among them, the "Transparent Ocean" plate used sand tables and models to fully and stereoscopically display the "two oceans and one sea" three-dimensional observation system independently built by the school, high-end instrument research and development, and advanced scientific research fleets. The school has a full-chain technical system and achievements from "basic research, germplasm cultivation, disease control, feed development, green breeding, equipment development, and high-value utilization"; the "Blue Medicine Depot" section shows the school from marine biological resources Full-chain high-end R & D platform and achievements to proprietary medicines. 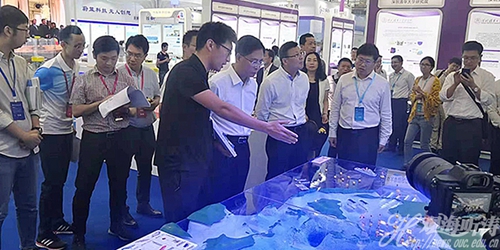 Yang Hong, member of the Standing Committee of the Shenzhen Municipal Committee and member of the municipal government party group (front left, second from the left) visited the Haida booth 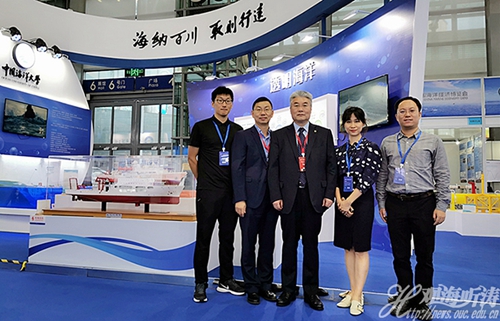 The China Ocean Economy Expo is known as the "China's Ocean First Exhibition". It is the only national marine economic exhibition in China. It is an important window to show the achievements of China's marine economy and an important platform for the development of the global marine economy and its latest achievements. With the theme of "Blue Opportunities and Creating the Future Together", China Ocean Economic Expo 2019 focuses on scientific and technological innovation, and organizes a series of forums and various supporting activities such as high-end dialogues, results release and business promotion. A total of 455 companies and institutions from 21 countries participated in the exhibition.